If you would like to have a real time feel of events, you may want to have a look at my video blog before proceeding...

Mt. Rinjani was special - I have been waiting to attempt this one since i have landed in this region. This one is probably the most challenging hike in South Asia (if we exclude hikes involving mountaineering). Standing tall at 12420 ft, Mt Rinjani can be easily spotted from anywhere in Lombok - It is a prominent figure on the island of Lombok.

Just like most other hikes in the region, this one too is heavily regulated. This is one aspect which i have had to live with for almost all hikes in the region. Hiring a guide is mandatory. Porters are optional but since i had a beginner friend with me, i wanted to be safe and hence chose a package with a guide and porter. My should ligament tear was also one of the factors that lead us to hiring a porter. The shoulder is much better now but i would have risked recovery by carrying a heavy load.

So, everything was perfectly planned. Here was the itinerary:

Day 2:
Start hike from Sembalun trailhead
Camp at Base camp

Day 3:
Attempt summit early in the morning
Back to base camp
Camp at Crater Rim Campsite

The plan was perfect - with sufficient time for transfers. The hike was going to be hectic but that's where the fun is !! A 4D/3N is much more leisurely but I don't hike for leisure ! Hikes have to be challenging and if they don't stretch you - you lose the whole essence of it...


This was my third trip to Jakarta by an Air Asia flight - the flight that departs Friday night. And, the flight has been delayed on ALL 3 occasions. But, i have nothing to complain because that's what i get for what i paid them !! Madhav, who was to accompany me for Rinjani, was there to pick me up - just like every other occasion. While in the flight, I actually thought of sleeping at the airport itself considering the distance of Jakarta city from the airport. I had to dismiss it because i had no way of communicating it to Madhav...
We had just about 4 hrs of sleep before we start our journey the next day.


We took the early morning Lion Air flight to Mataram. Mataram is the new swanky international airport of Lombok. It has been beautifully built. The majestic summit of Mt Rinjani was visible from the runway as we got down from the flight. After having a look at this view, I just could not resist reaching the summit !

We were picked up at the airport by John's driver. We had contracted with John (Click HERE to contact him) for a guide,porters and transport. The package also included one night's stay at Senaru. The entire hike was professionally managed by his team. We didn't want to be part of a larger group so we had the guide and porter for ourselves so as to move at a faster pace...

For most part of the drive to Senaru, we could see the summit of Mt Rinjani - you just can't miss it... Senaru is a 3hr drive from Lombok. Once we reached Senaru, we were shown our lavish villa that we were to stay for the night. All we wanted then was a bed to crash and get some sleep. We went around to a couple of waterfalls nearby. They were good too..

Day 2: Sembalun Trailhead to Base Camp

We started early and traveled for about an hour to reach the trailhead at Sembalun. The ascent to the summit can be made from both Senaru as well as Sembalun.

After about an hour of hiking, Madav, who was accompanying me decided to drop out. I guess he was mentally not ready for this one. It is easy to feel dispirited when you look at the 3 day schedule. He decided to go back and spend some time at the beach instead !! The porters were carrying equipment and food for 2 people and we had no choice but to continue because the schedule was really tight. There was no way they could offload some of the stuff and come back on time for first night's camp.

I continued solo. In fact, nowadays i am more comfortable traveling alone than with a group..

The peak is always there in front of you to keep reminding you of the challenge that lies ahead. It pushed me even harder to reach the summit of this majestic peak.

There is a nice patch of grass meadows just as you begin hiking. It is a reasonably horizontal patch but it felt nice to walk among grass as tall as me (I am a shortie so i presume the grass was not beyond 5 ft in height !!)

The incline keeps on increasing as you cover distance. I was told the last patch before the summit has a steep incline so i kept reminding myself that the worst is yet to come...

We were doing good pace and were tracking to plan. There was a picturesque spot just before base camp. It was beautiful - we decided to spend some time there.

We reached the base camp on time and setup camp for the night. We had an early start @3 AM next day for the ascent to summit.

Day 3: Summit ascent and on towards camp @ Crater rim


I was under the impression that this day would be a smooth ride apart from the summit hike. I was in for a shock...

We started early and hiking at decent pace. However, the last patch was too steep and it slowed me down. We were about 45 mins away from the summit when the sun came up. Ideally, one would like to witness sun rise from the summit. 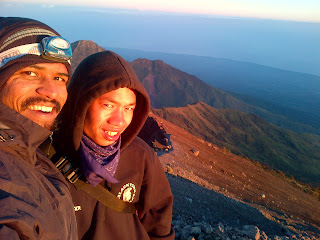 The last patch was indeed steep. I realized that i need to work more on my fitness.

The view from summit was outstanding - i can't explain it in words. The view you get from 12000ft+ gigantic structures right next to the ocean had to be amazing. We had gained almost 10,000 ft from the point we started - that was a significant achievement indeed.

After spending about half an hour consuming views, we started our descent to base camp. In less than a couple of hours, we were back at base camp.

However, we had a decision to make.. Almost all of the remaining groups were returning back the same route since most of us were delayed in reaching base camp. I knew that this might be my first and last attempt of Mt. Rinjani. My guide told me he would follow anything i decide irrespective of its consequences. That comforted me - I took a call to continue on to crater rim for the night.

The slope down to crater lake was steeper than i expected and took us more time than we had anticipated. We reached Crater lake on time for lunch and had a daunting 4 hr uphill on to crater rim campsite. We surely were not going to make it before sunset. Surprisingly, we did good pace on the uphill climb despite hiking for almost 15hrs the whole day. This was the toughest day in the whole itinerary.
I was happy i could stretch and the result was really satisfying. Got some great views of Mt Baru as well as the summit of Mt Rinjani from the campsite at Crater rim.

Looking at the summit from Crater rim campsite gave me a feel of accomplishment. The peak is majestic and it displays itself only for a short while during the day.

This was an easy downhill hike where we would lose close to 8000ft of altitude. It certainly was going to take a toll on my knees. We did this downhill real fast and did the whole patch in less than 5 hrs. My guide and I were in fact running downhill in the dense forest. I was stretching my guide on this patch - I asked for breaks to be skipped and i could see that he was not expecting that!!
Finally, he convinced me to take a break just half an hour before completion - I had to give in. He wanted to treat me for one last time - He was a great cook. He was so used to my taste over the last couple of days - I gave him no instructions for the last meal. He made it exactly the way i want...

I was feeling a bit sad that this was coming to an end. But then, that is part and parcel of every great hike. You want it to continue forever. But, life goes on...

This is easily highlight of this year - I certainly can't think of anything better in this region.

Email ThisBlogThis!Share to TwitterShare to FacebookShare to Pinterest
Labels: The Adventurer in Me

what a challenging journey... it must be really hard, i myself won't be able to do that.. but you've done it so great, and i'm sure the scenery from mt. Rinjani is really worth the effort :)

Rinjani is certainly not a beginner's hike but it is certainly doable. It is not all that bad!!
The view from summit pays for all the hard work - really outstanding.
I would say, work out for a while and then give it a shot when you are ready!!

Vijay, as I read I panted for breathe. Younger days we used to climb any possible mountains that we came across in India. How I wish I am of that age to do all this. At least privileged to read what you experienced. Very good pictures. Our place is waiting for you.

Thank you - AUS/NZ is on my list. It is coming soon.. And with the way my Tibet trip is heading (almost near cancelation), it might be much sooner than expected !

Will let you know well in advance.

Hi i am a single girl, thinking of planing trek up Rinjani.Maybe i might be able to get a friend to come along. Can u recommend your guide?

John was my guide for this trip. I would strongly recommend him - He managed it professionally. His contact details are available at his website below:

All the best - Enjoy!