This time around, i wanted to attempt the most difficult hike on the island - From Teluk Bahang forest park to Penang hill. It was not difficult in terms of terrain but in terms of timeline. It is a hectic 8-9hr hike with no camping options. The only place you can stay for the night is at the hotel on Penang Hill. It seemed  like a good challenging hike...

However, i didn't know that i was in for a surprise despite all the research i had done.

None of the blogs or travelogues had a mention of a virus outbreak in the forest park (Taman Rimba Teluk Bahang). Apparently, the park was closed since May 2011 until further notice.

Last time I was stranded at a trail head was in Canada (Why you need to know French in a French province !) 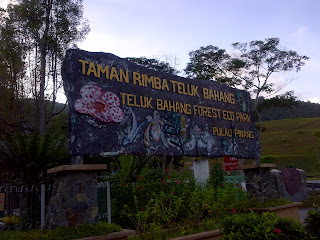 So, here i was at the entrance of Teluk Bahang Forest Park, trying to figure out an alternate hiking route to Penang Hill. I had come across another route through Botanic gardens during my online research. The challenge was to reach botanic gardens trailhead. After a couple of inquiries, i realized that i would have to take two buses to reach Botanic gardens in a journey that would last hour and a half. Took the right buses but i was dropped at Air Itam which is the starting point of the train to Penang Hill.

It was 1230PM and it had been four hours since i landed in Penang. I was still trying to figure my way out... Now, I had to reach Botanic gardens from Air Itam and apparently, the only way out was to trace the route all way back to Komtar and take another bus. That's where i met Dominique, who was also stranded at Air Itam and was trying to figure her way till the trailhead. She is a Canadian on a month long backpacking trip in Asia. I admire the courage of these backpackers - I would love to do a similar trip across the breadth of Europe some day..

We decided to do the hike together. We had a good long discussion on what each of us were doing in our lives. And of course, we discussed Canada, Asia and India too. She was planning to hike half the way up and i was to continue on to Penang hill.

The trail from Botanic gardens is not so daunting. It is relatively easy. The second half is on a tar road and that part is frustrating. There is an alternate hiking route through the jungle but has no markings. I reached the start of tar road around 330PM and had to choose the tar road because i was too close to sunset to risk the unmarked path. And, I was rightly advised so by locals.

All the drama since morning had zapped all my energy. I was not greatly satisfied with the hike but the turn of events more than compensated for it !! A treat was due despite the fact that alcohol was expensive at the hotel ! 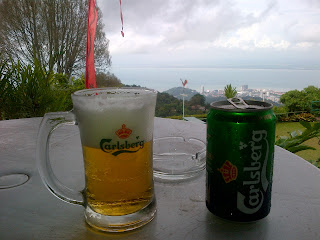 After resting through the evening, I had a good night's sleep. The next morning, I got up early, took the train down and spent about 5 hours walking through Georgetown. It has a nice ethnic mix of Chinese, traditional Malays and Indians too. As i was going through different communities i realized that Malaysia is actually more tolerant to all religions than i had expected. I could see churches next to mosques and then temples (Indian and Chinese) 100 meters away. It was great to see that atleast some pockets in Malaysia are not as radical as i thought they would be. Maybe even other pockets are as liberal - I do not know.

I spent time at the Penang Museum - got to know a bit about British rule, Japanes invasion and other petty wars that Penang has gone through. Visiting museums is NOT something i usually do - but, i can clearly see a change coming through in me. I have started paying attention to cities as well !!
I also had a look at Fort Cornwallis, rather whatever is left of it. I was reminded of Shaniwar wada in Pune (India) when i first entered Fort Cornwallis. Both of them are in shambles partly because they are not maintained and partly because its been long since their construction. Over the next couple of hours, I just roamed aimlessly on the 'sunday afternoon' lazy streets of Georgetown.

And, that was the end of the trip - a trip that had lots of drama, unplanned events, some hiking, sight seeing and much more.. I am falling in love with Penang !!

Here is my video blog capturing some events live !

Singapore-Penang (Sungai Nibong): Konsortium bus <<10-12 hrs>>
Sungai-Nibong to Teluk Bahang Forest Park: Taxi RM 60 (you can bargain more - i had pre-booked so it was slightly expensive) <<30 mins>>
Teluk Bahang to Komtar: Rapid Penang Bus No 101 << 45mins to 1 hr>>
Komtar to Botanic Gardens:  Rapid Penang Bus No 10. Don't take the bus that goes to Air Itam if you want to hike up. It does not go through Botanic gardens. Take the Air Itam bus ONLY if you want to go by the train <<30 mins>>
Komtar to Singapore: Newsia Bus company <<10-12 hrs >>

Email ThisBlogThis!Share to TwitterShare to FacebookShare to Pinterest
Labels: Athma - The Traveller, The Adventurer in Me


My tolerance with Singapore has been on a downslide right since i stepped in this city country. And, with the current pace of depreciation, I would say, the day is not far when i would spend every non-working day outside this 'Disneyland' (Singapore lovers, Sorry !)

Back to Medan. This was a spontaneous Friday evening decision. Twelve hours before departure, I didn't have air tickets, reservations, a plan of to-dos. Nothing at all. Just booked the tickets and left everything else to unfold in due course. Just made sure i carried a copy of wiki travel guide on Medan - Wiki travel has been my savior on most of my trips.

Also, I seem to be graduating from 'travel for hiking' to 'travel for exploring'. The last two trips have been exploratory trips with no hiking at all - this is a new emerging trend !! Just plain backpacking budget trips...

This was my first trip to Indonesia where I was on my own instincts. All my previous trips were with a friend in Jakarta who knew 'Bahasa' - the language spoken in Indonesia. And, all of those earlier ones were hiking trips.

So, I landed at the Medan airport on time. Two days in hand and no itinerary... I didn't want to take a cab so walked out of the terminal. Negotiated with a becak driver (Pronounced as 'Bechak') for 20,000 IDR and asked to be dropped at the Grand Mosque, which was at the center of Medan. Later, i realized that i could have had that ride for 15,000, maybe even 10,000 if i had known Bahasa. It has been a while since i have negotiated in a place where i don't know the local language. Nevertheless, that was a good first step.

I was offered everything from accommodation to girls to Marijuana right in the becak. I politely refused to all of it but apparently these guys have a good network. Well, that was quite liberal for an Islamist nation! So, if you happen to need to any of those mentioned above - give the becak driver a shot ! 'Stay away from drugs' is my simple advice - All South Asian countries have zero tolerance to drugs.

I was dropped at Angel Hotel which is mentioned in Wiki travel. It is a decent place for backpackers - Almost all guests were Caucasians. Got a single room for 60,000 IDR per night. Plain basic bed with an attached bath - Was a bit smelly though ! But, you get what you pay for. If you happen to stay longer, i would recommend staying at a better place. I just wanted a bed to crash at night - so, it was fine with me. 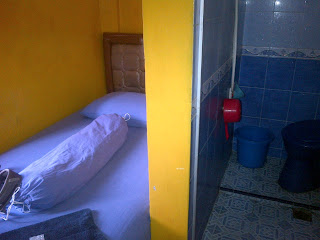 Headed into the city right after checking in. The Grand Mosque (Mesjid Raya) was right next to this hotel. Religious places don't appeal to me so didn't bother to go in. Went out exploring Medan on foot. I always believe that the best way to experience a city is on foot, provided you have time.

Medan seemed so familiar to me. Orderless, chaotic, noisy but full of life. People are nice and so are the becak drivers. It is like any other Tier II city in India, where i have spent almost my entire life till now.
I actually managed to have a mini conversation at a 'Chai ka tapri' (Tea stall) - Some of them are able to communicate in broken English.

After walking throughout the afternoon, I decided to indulge myself at De'Spa. Spent almost the whole afternoon there. It is a good place - Had a 2.5hr rejuvenating session for about 200,000 IDR. Felt really fresh as i came out. Just to warn you, this is NOT one of 'those' massage parlors !! If you would like more information on 'those', we can take it offline...

At about seven, I left for MC&P (Medan Club and Pub), which is supposedly the best place for expats. The Club was reserved for a private party and entry was by invitation only.

However, i noticed something peculiar. There was about a stretch of one km filled with flower greetings for somebody's wedding at the club. Could be a way of 'Medan'ians' showing affection or could be a way of projecting social status. Either ways, I enjoyed the colorful walk. 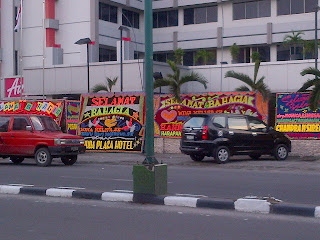 The next best club was 'The Tavern' at Dhana Toba complex. Took a becak - reached there by eight. Closed !! It opens at 10 - I had no intention of getting sloshed in a foreign country. Went to the cafe at Dhana Toba complex, had Ayam Rendang. It is a spicy chicken dish with steamed rice - a local Indonesian meal. Being an 'Iyer', there is no way i could have skipped a spicy chicken dish !!

Headed straight back to the hotel to catch up with some sleep.

Day 2 was spent lazily going around aimlessly. Reached Sun plaza for lunch - Spent 3 hours reading Khaled Hosseini's 'The Kite runner' at a cafe. It was getting dark and i could sense thunderstorms in less than 15 mins. Skipped my plan of walking all the way back - took a becak to the hotel. It started pouring just as i entered the hotel ! Had a nice discussion with a Turkish lady who was doing business in India exporting handicrafts to France. We discussed everything from her recently acquired grandmom status to the European crisis to real estate in France to mosquito nets ! Of course, India too was discussed..

The next morning, I had an early flight back to the grind... End of another nice break !

Posted by R Athmanathan at 6:00 PM No comments: Links to this post