All the images below belong to Andre Paquet who has been kind enough to allow posting them here. Thanks Andre ! 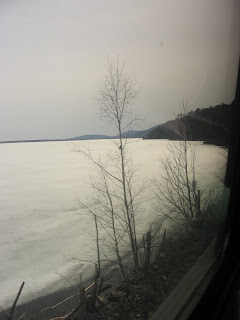 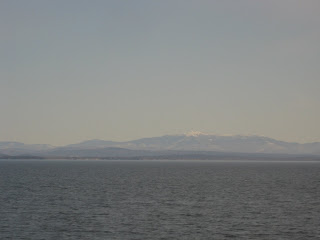 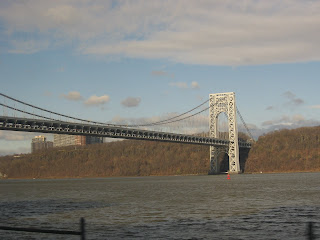 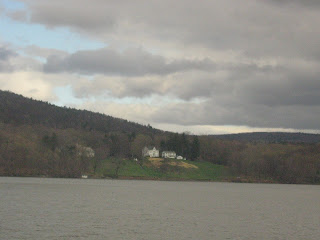 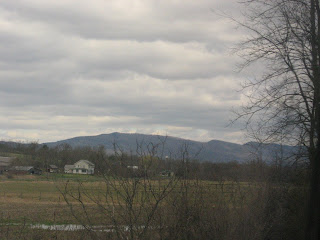 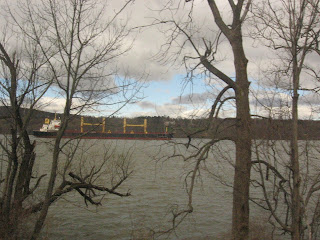 Hudson
Posted by R Athmanathan at 9:46 PM No comments: Links to this post

Email ThisBlogThis!Share to TwitterShare to FacebookShare to Pinterest
Labels: Athma - The Traveller

Montreal to New York by train

Crossing the US border by train was the only mode of transport that I have not attempted and hence I decided to do it his time. The expectations were high. I have heard a lot of people talk about the wonderful route between Montreal and NY.

Here are some reasons why you might consider traveling by train on this route:
1. AMTRAK's service is good - Announcements are entertaining. On my way to NY, the attendant proudly announced that this is a 19th century route and hence no WiFi. This may not be the right example here though!!
2. The route is scenic in the portion in US between Plattsburgh and Whitehall for 2.5 hrs or so. The train travels along a big lake all this while.
3. Lots of time to think as you have nothing else to do ! This might end up being an introspective trip if you are one of those hard thinkers.
4. Food is decent - much better than some other travel options I have had. Try out the chicken teriyaki rice bowl - it's nice!
5. The attendants are considerate enough to offer smoking stops as well..

However, I must say that I am not entirely satisfied with this journey. Here are the reasons why:
1. No WiFi on the train
2. No sleeper coaches - it is a 11hr+ journey. The seats were certainly comfortable but 11hrs is still a long time.
3. Border crossing takes up almost 1.5 hrs of the 11hr journey - the good thing is that you don't have to get down from the train.
4. The views were good but only for the portion mentioned above. The rest was pretty ordinary. My expectations were really high due to the heavy hype around this. The Pune-Mumbai route (3.5hrs) in India is much better I would say.
5. Sky high expectations. The whole trip would have been different otherwise.

So, travel with minimal expectations and you will be pleasantly surprised with this route.

I have asked for photos from a fellow traveller - they will be here once I receive them.

NOTE: This blog has been written real-time(during travel). However, courtesy AMTRAK, it has come online only after I reached home.

- Posted using BlogPress from my iPad

Posted by R Athmanathan at 7:28 PM No comments: Links to this post

Email ThisBlogThis!Share to TwitterShare to FacebookShare to Pinterest
Labels: Athma - The Traveller

It has been more than ten years since I have been listening to Yanni and this occasion was like a dream come true. 31st March 2011 would remain a special day all throughout my life.

Bell Center, the biggest stadium in Montreal, was packed to its max capacity (the website states 15000 for performances) for this enthralling performance from the maestro. The atmosphere was electrifying - just the presence of this huge audience was enough to set the stage for a wonderful performance.

It was 730PM and a fully occupied Bell Center was awaiting the maestro with anxiousness. Every passing minute was adding on more energy to the electrifying atmosphere. Speaking in Engineering terms, it was like 'Energy is proportional to Time' !!

And finally, the maestro's team arrives, which in turn increases the noise levels in the stadium. Nothing was going to calm us down except Yanni himself. A couple of minutes pass by and Yanni comes running (literally) on to the stage. He is greeted with a long applause by each and every individual present. For me, just seeing him from so close (i was sitting in the 15th row on the right side of stage) gave me levels of satisfaction that i have not seen in a while.

And then, for the next two hours, he took us to an entirely different world. As he rightly said "if I can take you away from your daily lives and give you some peace - i'll consider my job well done".. Yanni did way more than that !! Masterpiece after masterpiece, he was setting the mood up. There were also performances from his latest album 'Truth of Touch' which was released last month or so.

Of course, since he was in Montreal, there had to be some French sentences. With whatever little understanding i have of this language, I found it pretty decent.

As it turned out, it was not a dream come true only for me. It was pretty much the same for the maestro who was on this tour after several years. He talked about the times when he and his friend (on drums) were dreaming about THIS DAY. The day when they would be performing their heart out in front of a huge audience.

He was so genuine in each and every stroke of the piano and also in each and every sentence he spoke that I was completely drawn into the performance. Not even for a single moment was I reminded of the world awaiting me outside the stadium.

It had been almost two hours of non-stop music from the maestro and we realized (after making him come back twice after he left) that we were nearing the end. This was like nearing the end of a fully lit tunnel which has darkness on both ends.

But what did not realize was, as he was churning masterpieces one after another, that he did not play 'Santorini' from 'Live at the Acropolis'. It deserved to be right there in the end - the grand finale of this performance.

This is easily THE BEST event of my life, an event which gave me un-paralleled peace and satisfaction.

This one is indeed a fitting Finale for my stay in Montreal.

I would make every attempt possible to see him again whichever part of the world I am in..

- Posted using BlogPress from my iPad

Posted by R Athmanathan at 8:40 AM No comments: Links to this post