This is the longest stretch i have been in Singapore in the last year or so - six consecutive weekends !! There was a pumping desire to get out and Pulau Ubin seemed a very good prospect for a weekend getaway.

Pulau Ubin is a small island on the border of Singapore and Malaysia and is part of Singapore. It is 'unspoilt' in the words of a Singaporean... You can rent bicycles at throwaway prices (<$10 per day - depending on the type of bike) and explore the entire island on a day trip from Singapore. The trails are neatly marked and well maintained.

My camping gear was lying idle for a long time and i wanted to put them to use. So, I decided to pitch up my tent at Ubin.

There are 3 camping sites on the island:

Jelutong Campsite: This campsite is the nearest to Ubin Jetty - less than 10 mins walk from the entrance. This was crowded when i reached. I presume that must be true irrespective of the day you go. But, I heard that the coastline is pretty long at this campsite and can accommodate quite a few tents.
<< Added Later: I went camping once more and found this campsite empty - Guess you can't predict >>

Noordin Campsite: 3+ Kms from the entrance. This is towards the farthest end of Ubin and gives a view of Johor straits. Not as busy - but then space is limited too because of the international border cutting through the coastline. The coast is not wide too so that adds on to the space constraint. I would say it can hold 10 tents max..

Maman Campsite: This is just less than 3 kms from the entrance. I did not have a chance to visit this. I would assume this is not as crowded as Jelutong.

It was 530 PM by the time i stepped in Ubin. Went straight to the Police check post to register - Registration is compulsory for all campers. You don't have to de-register - you give all the details just once. Day hikers/bikers need not register.

I went straight to Jelutong and found a bunch of tents pitched up. The last thing i wanted was a party night at Ubin. It was 545 PM and the sun was coming down. I had an hour or so before sunset. I knew i would not be able to check both Noordin and Maman without walking in the dark. I have had some bad experiences pitching up tents in the dark and hence wanted to avoid that. I decided that i would camp at Noordin irrespective of the state of the campsite.

Reached Noordin around 615 PM and found an extended family having a fishing weekend. I walked towards the end to find a spot that is a little peaceful. That's when I met Raman, the head of that family. He was a very nice guy - mix of Singapore/Malaysia (the name sounds Indian though!). Apparently, he was a regular visitor of Ubin. He warned me of the high tide that night. He recommended me to pitch my tent as far as possible from the shore - I did just that, pitched it right next to the railings beyond which there was a forest.

I finished my dinner and was sleeping when i was suddenly woken up by the sound of waves. It was close to midnight and the sea was swelling. At about 1245 AM, water was less than half a meter away from my tent. One big wave and my tent would have been under water. It was not life threatening but the thought of sleeping in a wet tent reminds me of that scary night at Colorado (The Colorado hike)

But then, Raman had pointed out precisely the area until which waves might reach - he was bang on. Because, i pitched my tent about a meter away from his 'line' and escaped the scare...

The next morning, i headed straight back to Singapore to get back to the Monday-Friday grind.

End of a really short and sweet weekend outing...

How to get there? 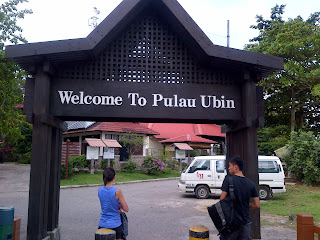 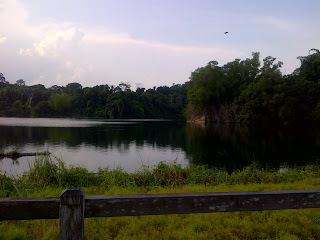 Posted by R Athmanathan at 10:44 AM No comments: Links to this post