As I look back at this rim-to-rim hike of  grand canyon, I realize that this one is indeed going to be very special. And, a rim-to-rim hike is possibly the only way one can experience this magnificent masterpiece in its entirety.

Grand Canyon and its history:

The sheer size and age of these structures is unbelievable. The majestic grand canyon(s) gave us a glimpse of the insignificance of human race in the larger scheme of things. Here is a brief history:

Hiking 21 miles (33Kms) in temperatures of 40-45 degree celsius is certainly not a casual hike.  Going down ~4800 ft and coming up ~5800 ft is a daunting task, to say the least. The hike is not technically risky as such but the extremely hot weather makes it a very challenging hike.

Five of us flew in from different part of North America to Las Vegas - Ali from Raleigh, Ady from LA, Pushkar & Deepak from San Jose and I flew in from Montreal. Luckily for us, we didn't face any flight delays like the colorado hike last year (http://athmagyaan.blogspot.com/2010/08/colorado-trekkers-paradise.html)

After spending the day at a hotel in Las Vegas, we left for the campground just outside Grand Canyon National park. Just before entering the campground, we were stopped by a police officer who informed us that the campround was full. This would have been a major upset to our plan as there is hardly any other spot available nearby for camping. But, luckily for us, we had reserved a campsite and were allowed to enter on providing reservation details. I guess the officer was bluffing to prevent gate crashers from entering the campground.

We reached our campsite around midnight and were ready for a short sleep as we had an early start the next day.

After just three hours of sleep we set off on this 21 mile rim-to-rim hike. We reached just on time for the 415AM shuttle which took us till South Kaibab trailhead. Here is a view of how it looked just after we started: 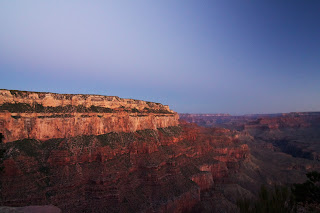 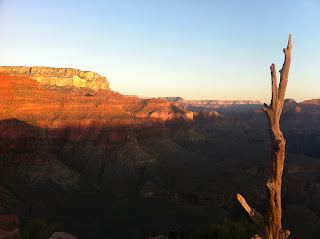 The first 7 miles were relatively easy but were taking a toll on our knees. This portion of hike is a steep downhill stretch all throughout until Phantom Ranch. As visibility was getting better, we had the opportunity to witness this majestic beauty. 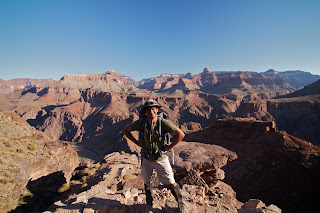 On the way down to Phantom Ranch 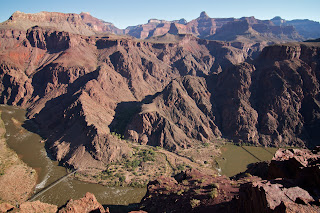 We reached Phantom Ranch (7 miles from Trailhead) at around 930 - about five hours after we started. We were beginning to feel the heat now. The only direction temperature was moving was upwards. 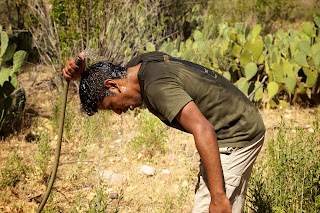 Water is all you need ! 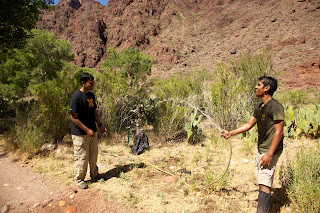 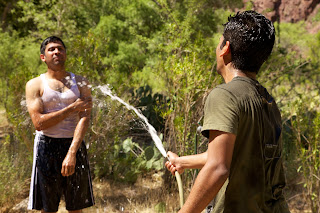 That's where we were warned by a ranger. We were about to start hiking the next 7 miles at 10AM in temperatures of over 40C. It seems there have been a couple of rescues during the past two days in the same stretch. Hikers seemed to have under-estimated the heat. We were told to wait till 4PM to start the hike. But then, without adequate sleep, next day's hike would have been tough. We decide to proceed albeit with all precautions given by the ranger (which also included getting down in water wherever possible).

As we were hiking through the flat patch between Phantom Ranch and Cottonwood camp, we realised that we had not made the right move - but, we had no other alternative. We should have either started earlier or hiked the first 7 miles faster to beat the heat. 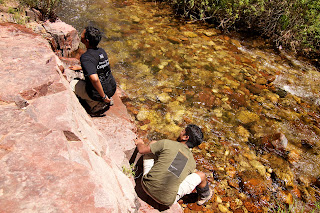 One of those water breaks! 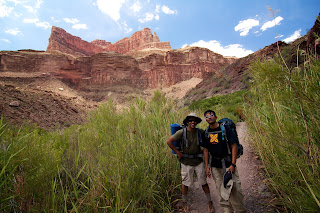 On the flat open stretch which made us stretch !

We got exhausted but still made it to Cottonwood camp in decent shape and with lots of time at hand. Ali and Deepak, who were quite ahead of us, reached cottonwood before 10AM thereby escaping the heat. Aditya, Pushkar and I reached at around 4PM.

There was nice little pool at Cottonwood camp much to the relief of all of us. 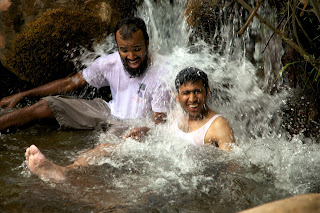 One can easily guess the temperature of water from their expressions !

After spending sometime there, we had  an early dinner and went to bed at around 830. That's when we realized that we had carried our sleeping bags for no reason. It was really hot - some people didn't even bother to get their tents. After this tiring day, a good sleep was very essential for next day's hike and we did manage to have that.


Next day, we started hiking the last 7 mile stretch at about 330AM. This stretch had some lovely views as we were gaining elevation. These 7 miles were the steepest of the lot but we could do it without getting completely exhausted as we were in the shade most of the time. 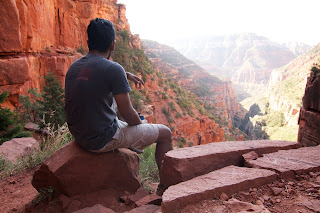 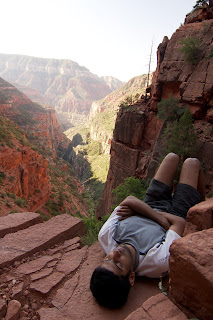 Pushkar finds a cozy(??) place for a quick nap !

Once at the top of North rim, we had all the time in the world. 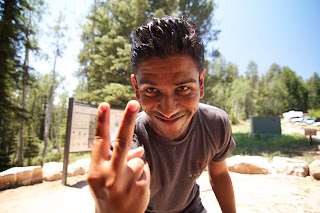 At the North Rim - Victory at last !


We had one full to day to look around before we take the shuttle back to South rim. We got some good pictures there. 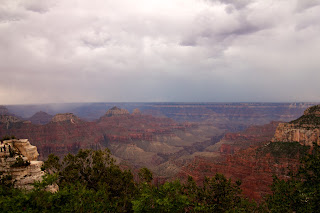 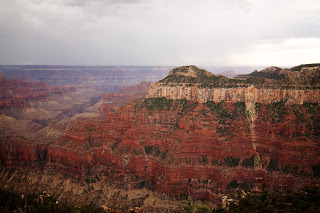 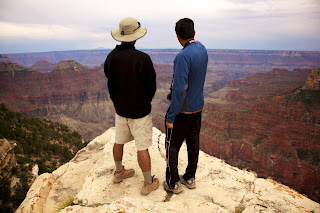 Pushkar tracing the trail - South rim is at the background at this pic - that's where we had started ! 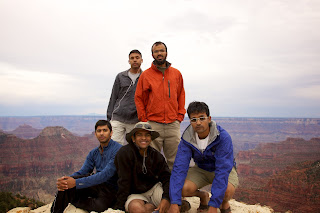 One of those rare pictures with all crazy buggers ! 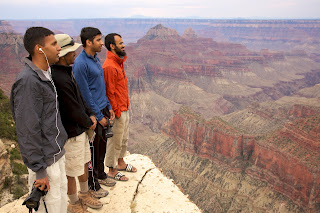 
Early next day, we took the transcanyon shuttle to South rim. We spent some time at the South rim before starting our journey back to Vegas. 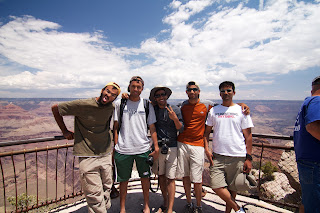 South rim too was good - We didn't notice it as we had started before sunrise !
We made a quick stop at Hoover dam which lies on the way to Vegas. An engineering marvel, hoover dam was built in the 1930s - it is tough to imagine that something so big and complex was accomplished such a long time back. 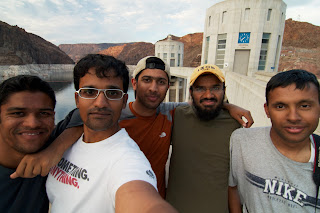 We reach the airport on time for our flights and look back at a very satisfying hike - one that will linger in our memories for quite some time. Also, this one being my last hike in the US before i head back to Asia, it was indeed special.

Images are courtesy of Ady & Pushkar (unless stated otherwise)

Email ThisBlogThis!Share to TwitterShare to FacebookShare to Pinterest
Labels: The Adventurer in Me

What a great Grand Canyon hiking trip with your friends. I'm getting ready to do my first Grand Canyon hiking trip with a friend, and a group - Just Roughin' It. I'm excited to be going with a group because I've never hiked the Grand Canyon so I will be happy to have experienced hikers with me. We aren't doing a rim to rim hike, but it sure does look incredible. Maybe after I do this hike I can do a rim to rim hike next, from your photos and story it seems like a must do hike, especially with friends.

It is indeed a lovely hike - you get to see the bigger picture. You will have a good time even if it is a smaller stretch - just make sure you are prepared for the heat!!

Thanks R Athmanathan! We're going this fall so hopefully it won't be as hot, but I'm sure we'll still need plenty of water :)